I’m back! Sorry to keep you waiting..

So, after the Dead Sea visit, our tour bus brought us to Prophet Musa A.S mosque and shrine, which is situated nearby. It’s a small an old mosque on top of a hill, in a middle of a desert. This is the picture of the inside of the mosque but outside of the pray area.

We performed jama’ solat for Maghrib and Isya’ there..

This is the praying area for women..

And this is the maqam of Prophet Musa A.S. inside the mosque. This tomb is almost 15 feet long, MasyaAllah.. He must be really really tall..

The next day, we visited Al-Aqsa mosque for the first time!! But we didn’t go straight to the mosque. Our tour guide brought us around Jerusalem town.

This picture was taken from the Mount of Olives. Can you see the grayish-almost-black dome behind us, that is the Al-Aqsa Mosque dome. The Dome of Rock Mosque’s dome is gold in colour, is actually behind Bella. (Sorry!)

And this is a donkey 🙂

And finally we are here! That is the Dome of Rock Mosque. 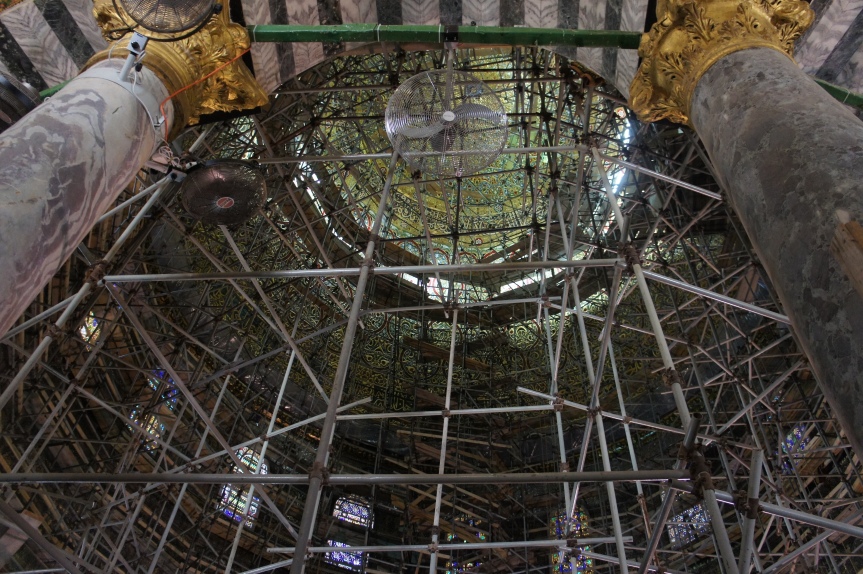 This is the inner view of the golden dome of Dome of Rock. It’s under construction. Just imagine the beauty of the calligraphy of these ayat. MasyaAllah.. And the golden dome (as seen from outside) was built exactly above the hanging rock where Prophet Muhammad S.A.W travelled from earth during Isra’ Mikraj.

This is a picture of inside the mosque, it’s almost like a hexagon in shape to my eyes. And the ladies will pray inside this mosque for Friday prayer while the men will pray in Al-Aqsa, sharing the same imam from Al-Aqsa mosque. At other times, both men and women can pray in this mosque at any time. 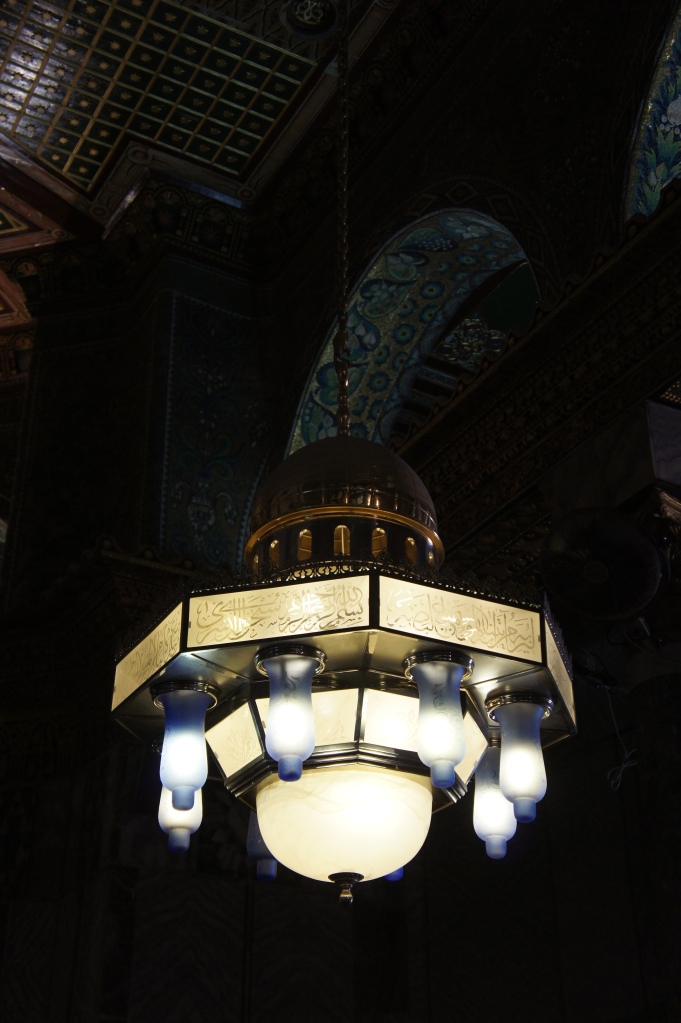 This is a small corner in the mosque (I don’t know what it’s called) where you can put your hands inside the hole in the window to touch the hanging rock that Rasullullah S.A.W stepped on his way to Isra’ Mikraj. 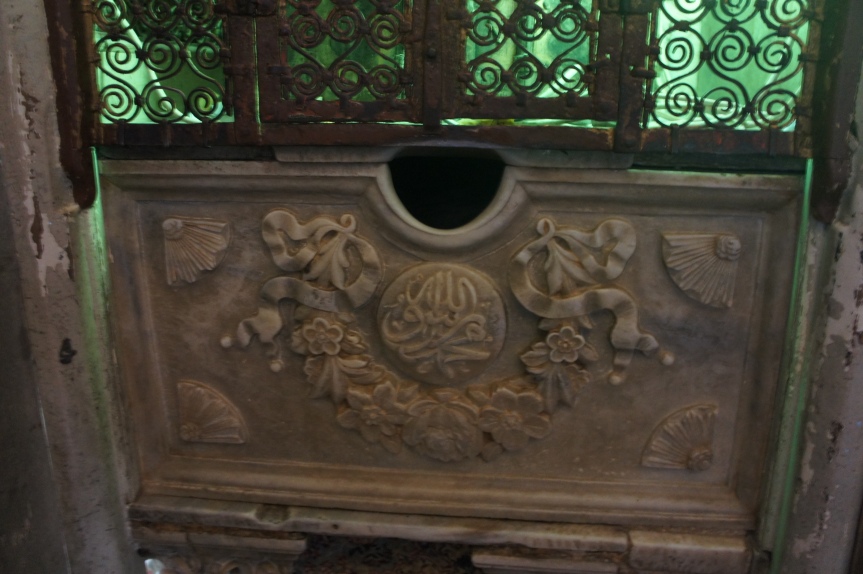 In that small hole, you can touch the part of the hanging rock.. 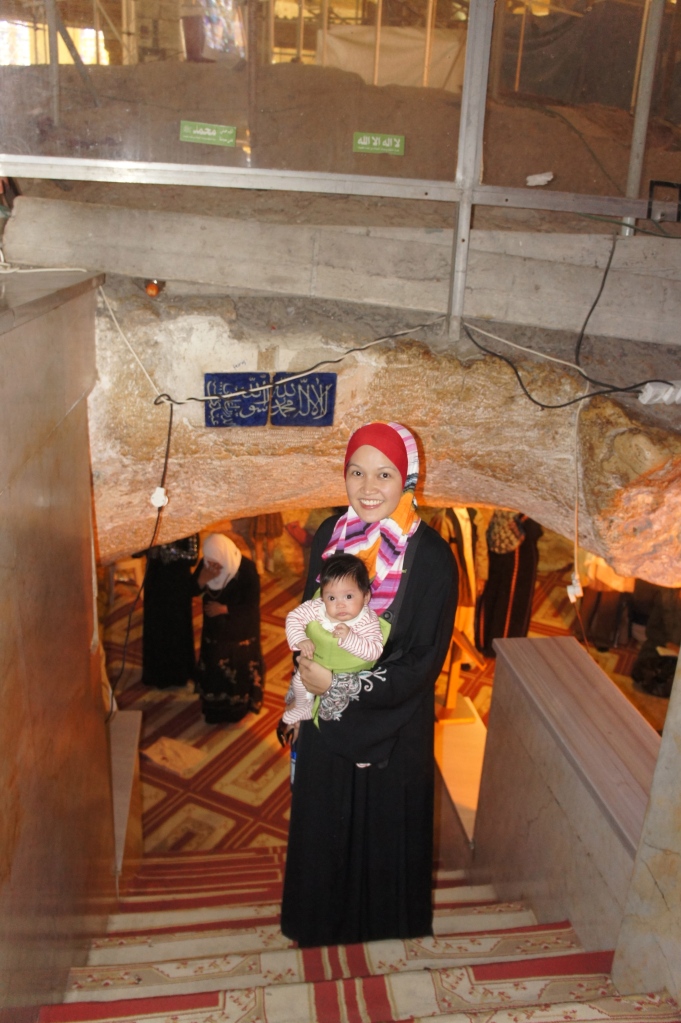 This area is build right underneath the hanging rock in the middle of the mosque. It’s a very small area where you can sit and pray, maybe for about 30 people at a time. Do you see the rock behind me that serves a the roof of the underground area? That is part of the hanging rock. MasyaAllah.

My husband is standing right in the middle of pray area underneath the rock. I put up a picture without flash so you can imagine the real environment there.

Outside the Dome of Rock mosque, there’s a place where according to local people, that is the place where Prophet Khaidir A.S always performed his prayers as shown in the photo above. Wallahualam..

Another hadith on Al-Aqsa Mosque..

Abu Hurairah RA relates that the Prophet SAW said, “You should not undertake a special journey to visit any place other than the following three Masjids with the expectations of getting greater reward: the Sacred Masjid of Makkah (Ka’bah), this Masjid of mine (the Prophet’s Masjid in Madinah), and Masjid Al-Aqsa (of Jerusalem)”. (Muslim, Bukhari, Abu Dawud)

Do you know Al-Aqsa Mosque was our first kiblat for 17 months before Allah ordered Prophet Muhammad SAW to turn his kiblat to Kaabah while he was performing solat at Qiblateen Mosque in Madinah.

Can you see the  grey blackish dome behind us? That is the Al-Aqsa mosque, we were standing at the Dome of Rock compound still. You just have to go down a few more steps and you are already at the Al-Aqsa Mosque.

Here’s the main entrance of the mosque..

This is the wudhu’ area exactly in front of the mosque..

And again here’s the compound facing Dome of Rock Mosque. Can you see the golden dome?

That is Bella and Tasha playing with the Palestinian girls at the compound of Al-Aqsa while waiting for  Maghrib prayer.

Here’s the inside of the mosque..

Alhamdulillah we managed to performed solat in Al-Aqsa every time we got the chance to, even for Subuh. We just dragged Bella and Tasha along with us. Bella with daddy and Tasha stayed with me. I just put Tasha on the floor while performing my prayers. And to my surprise, she didn’t cry!! Of course I make sure I changed her diapers and feed her before solat! Haha.. She just golek-golek on the floor next to the pillars.

Glad I get to share some of the mosques’ pictures with all of you. I hope with these picture, at least you can imagine how it’s look like inside both mosques. I have a few more pictures from our trip. InsyaAllah there will be Part III coming soon..

Learning to meditate to keep my sanity intact while trying to balance family, career, life and friendship. Not to mention a little OCD and neat-freak! But I never bother to wash my car.. I don't know why.